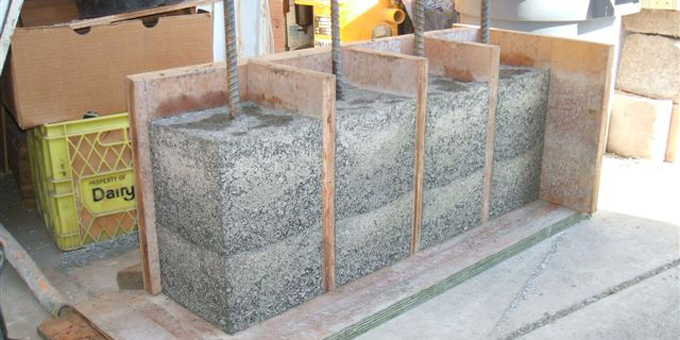 The R&D project is the result of collaboration among Thor Tandy of Unisol Engineering (P. Eng, C. Eng, Struct. Eng, MIStructE),  The British Colombia Institute of Technology (BCIT),  The Cement Association of Canada and The North American Rammed Earth Builders Assoc. (NAREBA), especially Arno Schmidt, NAREBA’s Research Director.  I was among the NAREBA volunteers who met on a 2009 spring weekend at BCIT’s lab to create a variety of RE test samples.

The tests included several RE cylinders for compressive strength testing as well as wall blocks from which vertical test cores were cut to help us understand the correlation between the RE test cylinder strength and the strength of an actual wall.  Samples were made for rebar pull out tests of both vertical and horizontally placed steel.  Two beams were rammed for beam prism tests.  Two 24″ wide X 96″ tall composite wall columns (7″ RE on either side of a 4″ insulation core) were made with a Roxul core and two different steel inter- wyth connectors to allow comparisons between diagonally and horizontally placed reinforcement between the RE sections.

The forming and ramming took two days.  Samples were damp cured 28 days to mimic the wall curing that is done in the field.  The results of the tests were very encouraging and, though the sample size was small, allow us to begin to understand the unique characteristics of steel reinforced RE.

This project represents a significant advance of rammed earth R&D to be completed in North America.  I would like to thank all parties who contributed their time, money, materials and expertise to help make this project a reality.